No Need For Spieling

My friend, Ralph, has extended his stay with me giving us more time together. He got to ride around the greater Sarasota area and experience for himself why this is a perfect place for motorcycling. You would never have to leave the county for beautiful ride after beautiful ride. Even I did not know of an almost-covered road he discovered just 30 minutes from my home running along the coast (I will go there soon and video myself riding the road with the camera that mounts on the bike, all tested and ready to go). The riding routes never seem to end around here. I have a long way to go before exhausting what the county has to offer, much less Florida itself. I am lucky to have so much at my doorstep and fellow riders eager to share their discoveries.

The last ride with Ralph was to Sanibel Islands a couple of days ago, about a 90 minutes from my home. Sanibel is a small town of 6000 inhabitants, a popular tourist destination known for its shell beaches and wildlife refuges. More than half of the island is made up of wildlife refuges. A dream of a place to visit, especially on a motorcycle. And we did not get to see it.

We had a pleasant ride right down to the Midpoint Bridge crossing the Coloosahatchee River, a few miles short of Sanibel Island. It had been drizzling on and off during the ride but as we literally get on the bridge and the drizzle, which had built into a steady rain, abruptly turned into a downpour. “The Everglades Flood!” I thought to myself, but it really wasn’t. Heavy as it was, I could see 40 feet in front of me, better than during The Flood. The Everglades ride gave me confidence riding in heavy rain so I did not feel the need to pull over. We both decided to ride across the one-mile-long bridge, a significant decision because once you get on the bridge you have committed to getting to the other side. Was this cockiness leading to a crash or sober judgement?

Weather systems move up the backbone of the Coloosahatchee River. Little did I realize there was a respectable weather cell moving up the river moments away from the bridge. You can see water on both sides of the bridge with the roadway a small ribbon disappearing in front of you. I’m sure on a sunny day this must be picture post card beautiful. For us it was nothing but gray fog and heavy rain with limited visibility. And wind. Yes, the wind. Did I not mention that? Fifty miles per hour gusts from the side. Those of course did not start until we were well on the bridge with nowhere to go but the other side. Riding at 45 mph with an equivalent side wind is like having someone unexpectedly kick your motorcycle while you are pelted by high speed water drops hitting you sideways. You wonder if you are going down and should stop. What to do? You speed up. In this situation, this was not an act of insanity. The hydroplane risk was low, so an increase in speed would not be an issue. The gyroscopic force of your wheels, however, are considerable and the best way to keep your two-wheel top spinning is get those wheels to spin as fast as is safe. I accelerated to 60 mph and the bike took the next wind blast a bit better (imagine getting scared and thinking I have to slow down; what do you think the next gust of wind might do to you and your bike?) All in all it was, shall we say, an exhilarating experience.

When we get to the other side, the land serves as a wind break and we found ourselves in ordinary heavy rain that lo and behold fell straight down. No high speed pelting, no gusty kicks to the bike, just a boring sense of relief that we were off the bridge. I pull into the next parking lot, Ralph right behind me. He rides circles around me, screaming at the top of his lungs as if he just came off the greatest roller coaster ride of his life: “Did you see that! Unbelievable! I’ve never been in anything like that!” Then I got to do what all motorcyclists love to do: “Yeah, that was fun. The Everglades was more intense.” Motorcyclists cannot resist telling you how they had been in more intense situations no matter what the situation: “You rode in 30 degrees weather? Not bad, I’ve ridden in 15 degrees”; “You spun out at 60 mph, flipped you and your bike in the air and landed in the saddle but still kept riding? Not bad, I did that with a Big Mac in my hand once. Almost lost the burger.” Riders like to sound like they have been in it all, sometimes beyond reason, to other riders. “Spielers” Ralph calls them, a slang word meaning someone who gives “lengthy or extravagant speeches or arguments usually intended to persuade.” Riders like to spiel. Nothing wrong with that. Though in this case, I wasn’t spieling. The Everglades Flood was more intense in a lot of ways: sheets of rain rolling down the road (no spiel), lightning exploding overhead (no spiel), and even the trees began to sink in the ground (spiel). The exposure on the bridge, however, did create a different set of intensities not present during The Flood. If we had we been in a surly mood, we could have argued which was more intense and maybe even come to blows. You can see the police pulling up and asking what happened: “My idiot friend here told me the ride across the bridge was more intense than the Everglades ride i took a few weeks ago. He has no idea what he is talking about, so I set him straight. Did I break his jaw? No, I just gave him a love tap, he has poor balance. Had you shoved me, I would have avoided falling and cracking my jaw on the cement divider in the first place because of my superior balance.” Okay, I’ll stop with the spieling already. Close as we were to Sanibel Island, it was late afternoon and the weather was not stabilizing, so best to leave the island to another day. We made our home by Interstate satisfied we got a good dollop of fun for the day. But there was more to come before the end of the day.

I want to end this post on some photographs so you can see what I am about to tell you is no spiel.

Surfer and His Buddy

Later in the day, we went for a sunset ride out to Siesta Key Beach just 20 minutes ride from my home. I was not expecting much except a relaxing sunset to end the day. Instead we arrive to find thousands of birds everywhere on the beach and in the air. They too thought a sunset ride was a good idea. Many of them were in water pools washing their feathers and doing their social thing. Rarely have I felt so lucky to have my camera. Here are some photos taken around sunset (click on the photos to see larger versions). These are the kind of stories you don’t need to make up: Evolution’s Engine showing you the core principle of evolutionary theory; A Surfer and His Buddies being followed by a lone bird at the end of a day surfing; the geometric patterns of Heated Discussion as if the birds had been posed. No need for spieling here. The truth was more than enough, motorcycle and camera optional. But they are options worth consideration, wouldn’t you say? 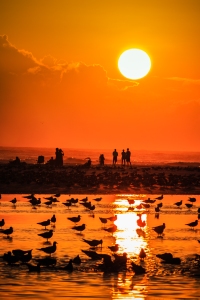 May You Always Enjoy The Ride

"Connect the prose and the passion, and both will be exalted, and human love will be seen at its height. Live in fragments no longer. Only connect, and the beast and the monk, robbed of the isolation that is life to either, will die."